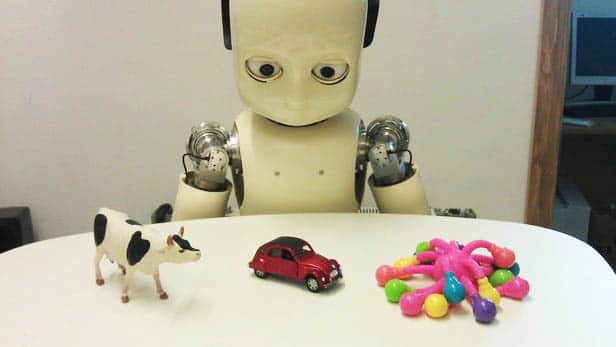 In order to learn new words, researchers have found that children use an automatic object-association technique, which is remarkably similar to how robots learn.

Young children are notorious for how quickly they can pick up words. In order to better understand the mechanics of such early learning, a new study tested the object association skills of both children and robots, and found that children use a robotic technique that may not be based on conscious thought.

As a control group, a research team at Lancaster University began with real live human children. Two-and-a-half year olds were given the task of picking a certain toy out of a line-up of either three, four, or five objects, with one of the objects’ being unfamiliar to them.

The aim was to get them to learn the name of the new toy through the process of elimination, a technique known as ‘mutual exclusivity’.

When for instance, a child is presented with three toys, a brown one, a yellow one and an orange one, they may already know that the brown one is called a rabbit and the yellow one is a duck. When asked to ‘show me the giraffe’, the majority of the children were able to work out that the orange toy was the target.

For the next tests, the researchers put a robot called ‘iCub’ through the same process. The iCub robot is an example of an ‘embodied neural network’, an artificially intelligent system with substantial learning capabilities, housed within a robotic body about the same size as a toddler. iCub has been used in the past for language learning studies, and was nominated to carry the torch before the London 2012 Olympic Games. 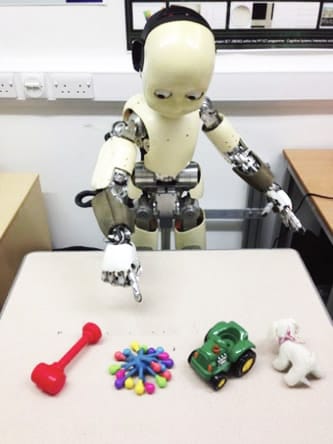 These robots were pre-trained to recognize a dozen different objects, and then, like the human children, were asked to pick out certain objects from a group, with the targets’ being a mix of both known and novel items. Interestingly, the robots learned the new words in exactly the same way, and performed to the same level as the real live children did.

As Dr Kaite Twomey, one of the study’s authors explained, “This new study shows that mutual exclusivity behaviour can be achieved with a very simple ‘brain’ that just learns associations between words and objects. … In fact, intelligent as iCub seems, it actually can’t say to itself ‘I know that the brown toy is a rabbit, and I know that that the yellow toy is a duck, so this new toy must be giraffe’, because its software is too simple. This suggests that at least some aspects of early learning are based on an astonishingly powerful association-making ability which allows babies and toddlers to rapidly absorb information from the very complicated learning environment.”

For the technically-minded, a detailed research report is available at: