A study, by scientists at West Chester University and the University of Delaware, which appeared in the journal Child Development and funded by the Research: Art Works program at the National Endowment for the Arts proposes that arts programs may help lower stress in economically disadvantaged pre-schoolers.

Everyone should know, these days, that poverty can be bad for children’s educational, social-emotional, and physical health, by adding to the damage that happens to the bodily systems that respond to the chronically high levels of stress to which children in poverty are more likely to be exposed. Recent research has shown that intensive arts programs, including music, dance, and visual arts, may redress this situation by lowering the stress levels of economically disadvantaged pre-schoolers, as reflected in their cortisol levels. Cortisol is also known as the stress hormone. 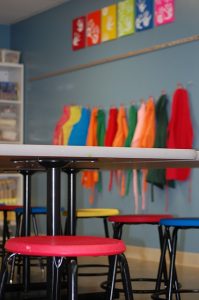 Eleanor Brown, professor of psychology and director of the Early Childhood Cognition and Emotions Lab at West Chester University, and the study’s primary investigator noted “our study is the first we know of that demonstrates that the arts may help alleviate the impact of poverty on children’s physiological functioning.”

The study researched over three hundred economically disadvantaged three to five year-olds at a Head Start pre-school program in Philadelphia that drew children from a range of racial and ethnic backgrounds. While all Head Start programs have some arts programming, this program, the Settlement Music School’s Kaleidoscope Preschool Arts Enrichment Program, is differentiated from the rest by the fact that it fully incorporates arts into the curriculum.

Children engage in multiple arts activities each day and these are conducted in fully equipped studios by trained specialist art teachers. The arts experiences both develop children’s artistic skills and promote learning in core early childhood domains like language, literacy, and math.

The study randomly assigned pre-schoolers by room group, to different types and numbers of arts classes. Researchers analysed cortisol levels in seven thousand samples of children’s saliva, which were collected in the morning, to set a baseline, then again after their arts activities and after their group sessions on two different days, at the beginning, mid-point, and end of the year.

Cortisol levels were found to be lower after the specialists’ arts activities than after the group sessions, suggesting that participating in arts programs helped reduce the stress levels of these children.

Professor Brown picked up on two important implications, in saying, “in an ideal world, no child would grow up in poverty. Working toward this ideal requires attention to, not only economic inequities, but also the many related inequities that harm children, who grow up poor, and to the opportunities for disrupting the strong predictive relationship between poverty and negative outcomes. This study demonstrates that a non-monetary intervention can reduce cortisol levels. In this case, the intervention is the arts.”

The positive effects were evident at the middle and end of the year, but not at the start of the school year. Mallory Garnett, research coordinator at of the Early Childhood Cognition and Emotions Lab at West Chester University, who also worked on the study, explained this by saying ‘the physiological benefits of arts programming may not be seen when children are first exposed.…The benefits may depend on children’s adjusting to the classes and accumulating skills from the (arts) program.”

This study’s importance lies in the fact that it strongly shows that arts programs of high intensity can reduce cortisol levels The findings are expected to further investigation into the arts’ being a vehicle for promoting well-being among children from disadvantaged families.

Sourced from Child Development, Can the Arts Get Under the Skin? Arts Classes and Cortisol Levels for Economically Disadvantaged Preschool Children by Brown, ED, Garnett, ML, Anderson, KE (West Chester University), and Laurenceau, J-P (University of Delaware – 2016) The Society for Research in Child Development, Inc. http://onlinelibrary.wiley.com/doi/10.1111/cdev.12652/full